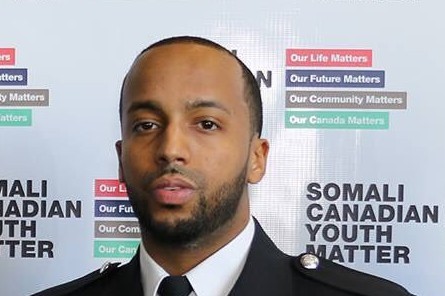 Cst. Liban Farah joined the Ottawa Police Service with an intention of making his community a safer place and on December 8, 2017, he did just that. Cst. Farah was patrolling downtown Ottawa when he heard a radio call for service in response to a shooting that had occurred at King Edward Ave at Rideau St in the heart of downtown Ottawa.

Cst. Farah, being one of the first responders on scene, demonstrated courageous action by quickly getting to the victim who had suffered multiple gunshot wounds. He saw that the victim had sustained a serious life threatening injury that needed immediate action. Cst. Farah thought quickly and stopped the bleeding until Paramedics arrived and stabilized the victim.

Cst. Farah embodied the Ottawa Police Service core values and demonstrated honour, courage, and service. He did this all while sacrificing his own safety at a shooting scene. This heroic act by Cst. Farah saved the life of an Ottawa citizen. To thank him for his actions and continued commitment to public safety, I wish to nominate Cst. Farah for the Police Hero of the year.

More on this story: ottawacitizen.com/news/local-news/man-in-serious-condition-after-rideau-street-shooting