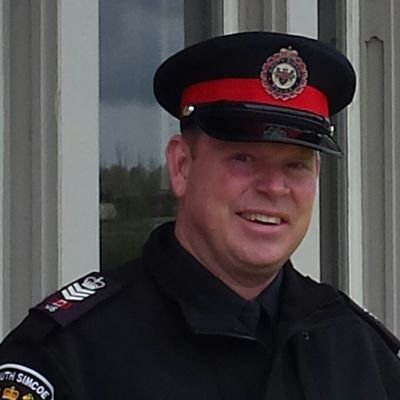 I actually met Steve online via Twitter. He was acting Inspector for the South Simcoe Police at the time, and being a supporter of Police depts, I retweeted and liked a lot of his posts. He and others at SSPS decided to volunteer their time to put together a Citizens Police Academy.

Steve was there every Thursday evening, on his own time, after taking so much much of his own time getting together the curriculum and visitors arranged to speak to us (VICKARS. CRIME STOPPERS, and others.). SSPS recently held a CCII 2-3 day meeting with 7 different police services attending. The information brought forward will help all officers now dealing with Critical Incident Command to be better negotiators for peace resolution. Guess who volunteered his time to make this happen?

Now, he has helped start a program at Georgian College for the Canadian Critical Incident Command all on his own time, sharing his knowledge.

He had asked if I would like to be part of the first CPA SSPS ever offered, and I took the course. Really enlightened myself and others about policing! I am now a Volunteer for the SSPS, and Steve knows he can count on me if he needs me. He taught me that giving back to our community just feels good.

Steve is now the Staff Sgt at their CIB division, but still volunteers his time but he does take down the criminals too. He's highly respected among his and the community in general. Steve just makes everyone else better around him, humanizing the badge and sharing his knowledge. Quite commendable!!