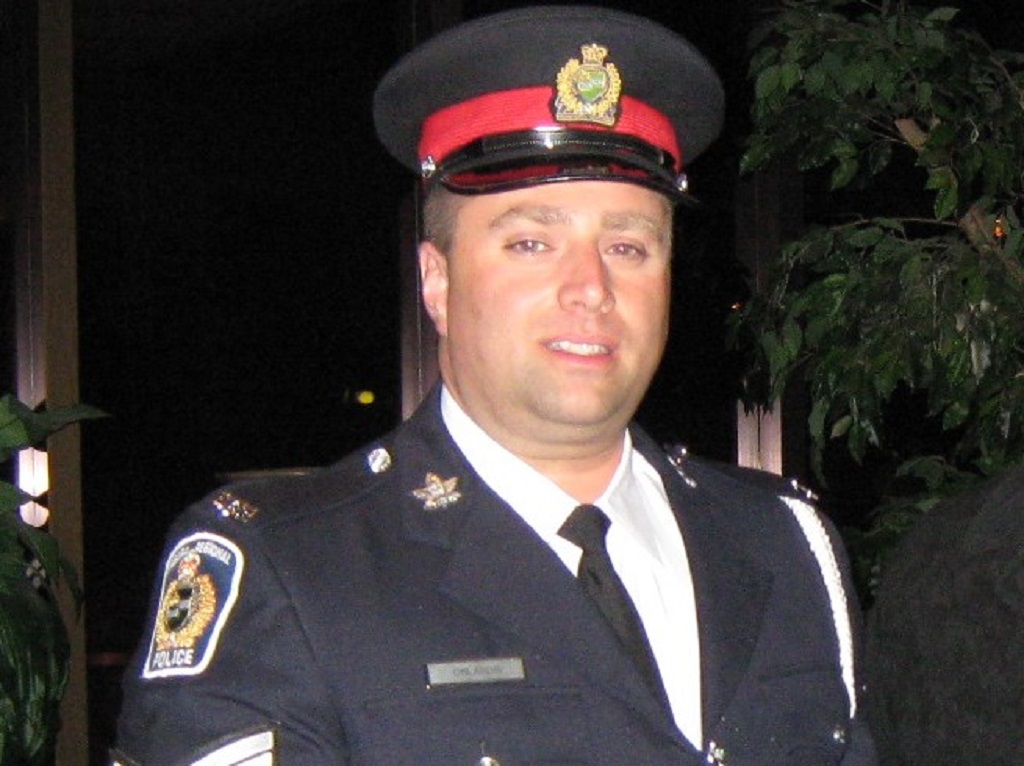 I would like to nominate my husband Sergeant Neal Orlando, with the full support of his 2 boys, who have always looked up to and admired him as both a great father and a police officer. Neal got hired by Niagara Regional Police shortly after we were married. He is a true police hero and has touched the lives of so many people.

In his 25 years of policing, Neal has always strived to do his very best in all areas he has worked, from being a Constable, part of the HEAT Unit (casino patrol), Detective, Media Liaison Officer, Patrol Sergeant, Unit Commander of the Community Services Unit, Special Enforcement Unit (traffic), and currently in the Prisoner Management Unit. Neal is an active 10 year member of the Niagara Region Police Association Council of Representatives, and is part of the member support committee and the political activity committee.

Neal has saved many lives throughout the years and supported those whose families have lost loved ones. One instance in particular, Neal responded to an active suicide attempt where a teenage male was attempting suicide by jumping off a bridge onto the QEW below. On arrival, he observed that the emotionally distraught individual was hanging from the guardrail by one arm with his entire body dangling over the highway. Neal immediately re-directed his back-up units and closed the highway in the interest of public safety. Now alone on the bridge, Neal attempted to negotiate with the boy, quickly realizing the efforts were futile and the boy’s strength was about to give out, he reached over, grabbed him by the belt and wrestled him back over the rail. To this day, this boy’s father sends Neal an annual Christmas card to thank him.

Another instance I remember is a time we were at a wedding and one of the cooks approached Neal and thanked him for saving his life. Neal arrested him for theft and drugs, which he did some jail time. He told Neal that the conversation they had during his arrest, and doing time, was a turning point in his life. After his release, he enrolled in culinary school, found a new group of friends, and was well on his way to becoming a chef. He was truly thankful for Neal saving him from ruining his life. That must have been some conversation!

Another heroic event Neal intervened with was a struggle on a bridge between a husband and wife. The man had run from his home, telling his wife that he was about to commit suicide. The wife chased after him, catching him at a bridge while he was attempting to jump. When Neal arrived, he saw the wife holding him by the legs as he pressed over the rail. Neal tackled him to the ground and held him there while the man fought to get away. He knew if he released his grip, the man would have broken free and jumped off that bridge, so he yelled to the wife to call and tell other officers where they were, and he held the man and struggled with him until back up arrived, which seemed like an eternity. Once apprehended, the man was taken to the psych ward and was treated for his mental health issues.

These are incidences where Neal has directly saved individual lives. However, Neal has had a larger impact on his community through his projects and community work. Some have been mentioned in earlier nominations, and there are too many to mention here, but there is one that Neal is particularly proud of and stands out as having a huge impact on the community. Neal developed Safeguard Niagara, a program operated through the Niagara Regional Police Auxiliary Service involving home security audits. Following a break in at his grandmother’s house in Sault Ste. Marie, which caused his grandmother to fear living in her own home, Neal thought of developing this project to make people feel more secure in their homes. He put together a training module for Auxiliary Officers using the principles of CPTED (Crime Prevention Through Environmental Design), he created home security audit sheets, and put it out to the community to schedule home security audits for those who felt insecure in their homes. Over the course of the project, hundreds of people had audits done and were given advice on how to improve their home security, providing them with a greater sense of peace of mind. Neal received many emails from people who had these audits done. One in particular commented that after having the audit done and improving her home security, her fear of staying alone in her home was now gone, and she looked forward to spending many more years there. Although this project is no longer active, he feels it had a huge impact on overall community safety. So the way I see it, he is a hero to the community as a whole by targeting special areas of need that are important to them.

Beyond policing projects and community involvement, Neal is also active off-duty within his community. As mentioned, he has spent many years coaching Beamsville Minor Baseball and delivered thousands of teddy bears to children in hospitals. Neal is also a very active member with the Village of Hope. It is a non-profit organization operated in West Niagara by Cheryl Keddy-Scott. Neal served on the Board of Directors for many years, being involved in numerous food drives, pantry programs, and he initiated the “Dress for Success” program. Neal approached businesses and law firms to donate gently used suits, dresses, and other appropriate business attire. This attire was loaned out through Village of Hope to men and women who had job interviews but could not afford to buy business clothing. It allowed them to dress for success. The program was expanded for prom and graduating students as well.

Neal’s main passion is community policing and traffic safety. Impaired driving, distracted driving, and truck safety are initiatives he constantly targets and by the many arrests and tickets given, I know he has saved lives through prevention, education, and enforcement. He doesn’t just go to work and get out on the road to take calls, he is an active working Patrol Sergeant who gets involved in everything.

As mentioned in the other nominations, Neal has created and spearheaded dozens of programs and projects that have been implemented and successful in fighting crime and other targeted areas of need in the community. As a sergeant, Neal fueled his constables with motivation and energy to be the best they could be, and has a unique ability to transfer his knowledge and energy to the group. They love working under his leadership. He is confident, caring, supportive, and excellent at what he does. On or off duty, morning or night, at home or on vacations, he is always a phone call away for advice and direction.

He has won Police Officer of the Year twice (2002 and 2009), has been awarded the Queen Elizabeth II Diamond Jubilee Medal, and has over 7 Commendation awards from the Chief, his Commanders, the Commissioner of the OPP, and won the Traffic Safety Leadership Award. I know the real winner here is Niagara Regional Police service and the communities of Niagara for having such a dedicated and committed Sergeant. He has done an incredible amount of exemplary service for NRP and the community, which is why he is so deserving of this award and recognition.