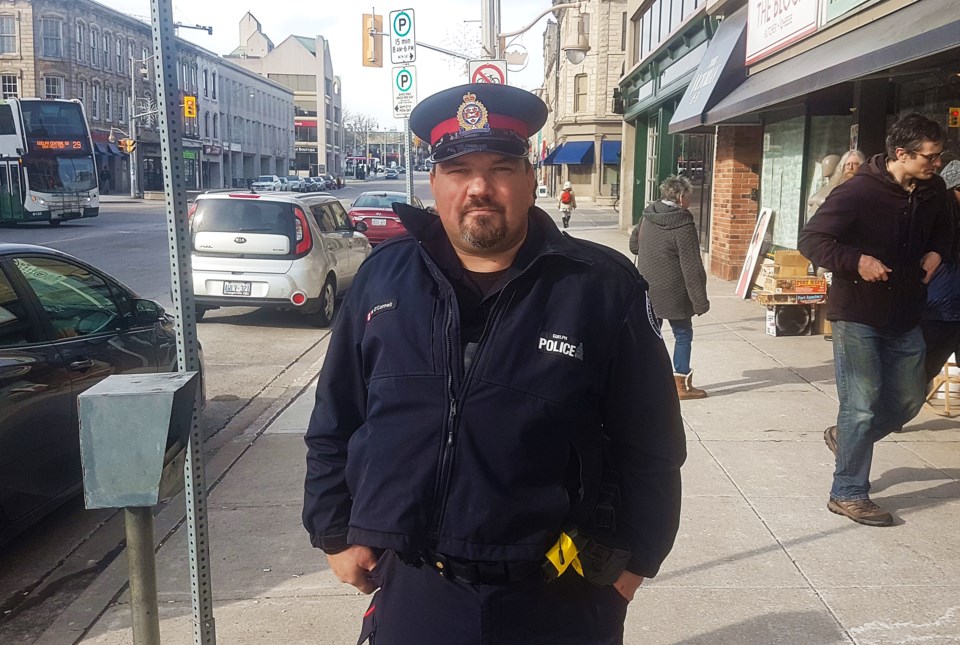 I would like to nominate a very fine man who had made a huge impact on the state of our downtown. Constable Mark O’Connell is an 18 year veteran of the Guelph Police Services. Constable O’Connell walks the beat of downtown Guelph. He pops into businesses to see if they’re ok, any problems, and so on. But he goes above and beyond. Like most cities and town, Guelph has a very visible addiction and homelessness crisis. But Mark treats the suffering drug addict/alcoholic with respect.

He stated in a recent news article that these people have a disease no different than cancer or Parkinson’s. He engages the marginalized. He offers help, a kind word and makes certain they know where to go to begin their recovery. He engenders trust among all who meet him downtown. The shopkeepers love him and the marginalized respect him as fair and caring “cop”.

I’m a retired high school teacher. Almost eight years ago, I was discharged from the internationally known treatment centre here in Guelph, called Homewood. I was treated for drug addiction, trauma and alcoholism. I’m almost eight years clean and sober. I’m immersed in the recovery community now as I volunteer at Homewood, working with addicts and alcoholics. So when I read the news story about how he treats the suffering addicts/alcoholics with respect, I was connecting, not only as a previous alcoholic but as a teacher imagining how many young people gain the priceless experience of reading of Mark O’Connell.

What a fine example of a police officer he is to young people. How many has he inspired to become police officers in his 18 years service?

And on Christmas Day, where was Constable O’Connell? Dressed up as Santa in the downtown drop-in centre.

He is truly a hero making an impact on our city. God bless the Mark O’Connell's of the world.