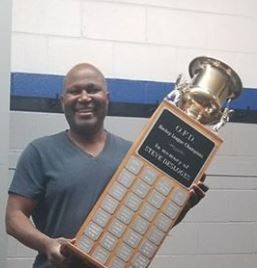 On January 12, 2006, Constable Vaz was working. I asked him to let me know when he could take his lunch so that we could meet some window installers at our home. I left work at the General Hospital to meet him at the house and shortly after we started walking around with the contractor, we heard a loud crash and the sound of a car revving up. Constable Vaz ran to see what was happening. He found a man slumped over the steering wheel and was unresponsive. Coincidentally, he had just obtained a new defibrillator that was in his trunk. He took it out, set it up and used it on the man in the car while calling for ambulance.

A few weeks later, we received a knock on the door. It was the man's sons wanting to thank Cst. Vaz for knowing what to do and saving their father.

He just received his "annual" card from the family in our mailbox that has come every year on January 16th. It's 2020 and it really hit home to me that Lenworth gave this man and his family 14 more years together and counting thanks to his knowledge, quick thinking and the OPS having the right equipment available to its officers.

I saw this award and although this incident happened a while ago, I know for certain he is that family's hero and mine. He is very modest and I thought maybe it's time to bring it to someone's attention. Thanks so much!