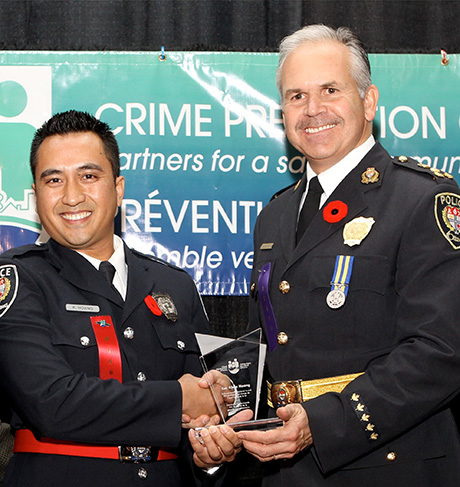 Hired in 2003 by the Hamilton Police Service, Cst. Khoa Hoang was never a typical recruit. He was college and university educated, had a psychology degree with a focus on religion, and worked as a support worker to neighbourhood kids who got in trouble with the law. He was not only different, he was the first Vietnamese police officer ever hired in the city of Hamilton.

Cst. Hoang is a first generation immigrant who lived in community housing and talks about poverty as a gift - not a weakness. Even as a student he volunteered over 2000 hours giving back to the community that had given so much to him, and would be recognized as a "Spirit of the Capital" in 2000. He is a mentor to his friends, classmates, colleagues, family, and this community.

He was elected class leader by his peers in Police Foundations and described by the late Max Keeping as, "one of the most impressive young people I have met in the Capital." At the Ontario Police College he graduated with one of the highest average in his class and received Chief Mullan's commendation for courage before returning to Ottawa in 2007.

Since then, he has continued his service to our community by acting as Vice-President of Circles of Support and Accountability and is one of the only male members of the Ottawa Coalition To End Violence Against Women, where he is a spokesman for the Manifest Change champagne. In 2012 he received the Law Enforcement Professional of the Year Award from Chief Bordeleau, who served with him as a member of the Community and Police Action Committee.