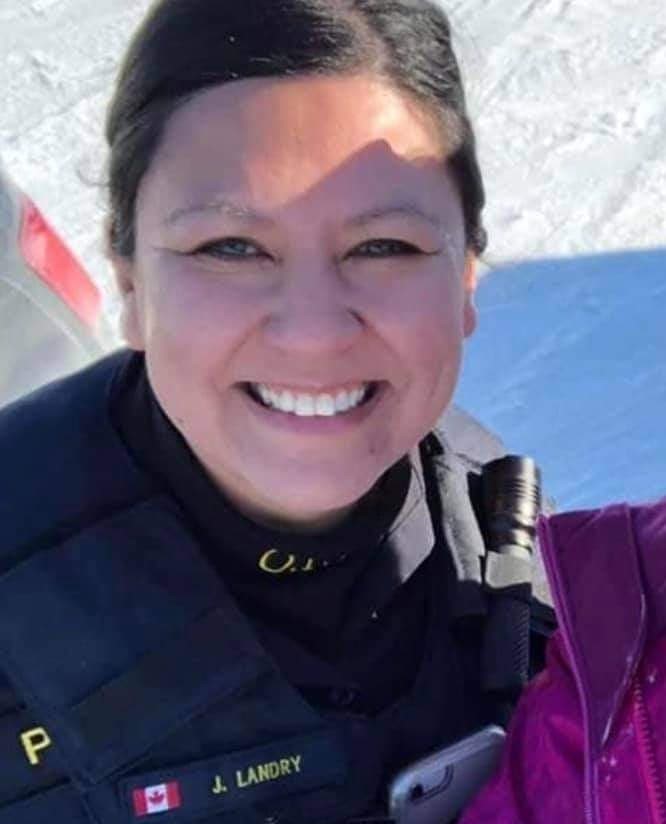 Ontario Provincial Police Constable Jennifer Landry, of the Temiskaming Detachment, was an Indigenous woman and a member of the Matachewan First Nation. As a former constable of the Nishnawbe Aski Police Service (NAPS), she was involved extensively in the communities she policed as an officer and citizen. She treated everyone she encountered with respect and dignity including those that she arrested. She was an advocate for violence against women, children and other marginalized and vulnerable citizens. Please note that on October 14, 2020, Cst. Jennifer Landry died tragically while off-duty, leaving behind her 8-year old daughter and her family.

Jenn was highly respected amongst her peers and throughout her career, sat on various committees in Kirkland Lake and Temiskaming Shores. Jenn was a role model and provided many hours of volunteer work for various Indigenous organizations in the District of Temiskaming. She served as President on the Board of Directors for the Temiskaming Native Women’s Support Group for many terms. She sat with the Ontario Native Women’s Association and the Native Women’s Association of Canada representing our District. Jenn recognized the impacts of childhood trauma, intergenerational trauma and violence on individuals in the communities she served. Jenn was able to support her Elders and teach the Youth through encouragement and support. Her various acts of kindness included giving an elderly male suffering from mental health and addiction issues money to purchase food and coffee while he waited for his family to pick him up. Not only did she actively support victims, she was very impactful with her colleagues. She consistently provided support and assistance to her co-workers who had been experiencing difficulties with personal/professional issues and occupational stress injuries. She went over and above the regular duties of a police officer. Her kindness led her to become a strong leader within the community. Jenn had a great impact on those she worked with and those communities she served. She was a Police Hero that always took the extra steps to help people in all of the communities she served including James Bay Coast, Cochrane, Kirkland Lake and Englehart.