Posted by Pao Communications on February 25, 2022 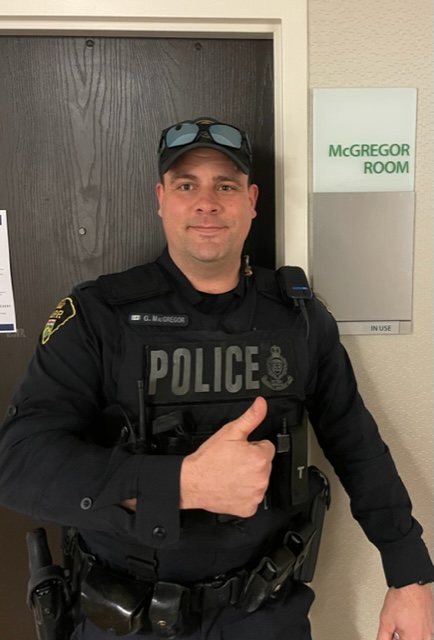 It’s not easy to write about someone who has had such a profound impact on one’s life. The concern is often that I won’t put into words exactly how this professional helped me. In reality; he saved my life. If you had known me back then, you would know I was the last one who wanted to be saved. I was living my death sentence and the reason I’m here today is because of the support of one officer. In September of 2019, I was very much rushing to hit my rock bottom. I was burnt out, sleep deprived, addicted to anything and everything, and nursing a psychosis from allowing my PTSD to go unchecked. I had hit my breaking point and crashed my vehicle into a tree. Laying out all the facts is important: In my vehicle, I had paraphernalia, medications that weren’t mine, and I was in a state that one could only assume I was impaired. I was brought to the hospital where I met Officer MacGregor.

I hated cops. I have been failed and hurt so many times by people in uniform. So you can imagine when he was charging me, I wasn’t too pleased. I wish I could tell you it was in that moment that I felt the world crashing down. Truthfully, in that moment, I was the shell of the person I am today. The assumption (fair to make) that I was impaired and I was being charged as such. But this time, I wasn’t. I was, at that moment, sober.

A cop will often give some advice about getting help and be matter of fact about the obvious. I knew I was a junkie. He never called me that name, but it felt like he did. It was in this moment, the years of abuse and pain, that felt like all of world's hurt came from my heart and out of my mouth. It was not long-winded, but this was the first big step. I told him: “I’m not a junkie, I’m a trafficking survivor. Don’t judge me.”

The question of why I crashed my car didn’t make sense. I know now I had gone catatonic when having a flashback and perhaps in that moment, my body wanted to end it. I am so grateful I did not injure or kill another person. Make no mistake. What happened that day, I take full accountability for. I have paid my dues to society and feel remorse. In no way did Officer MacGregor cut me a break. Everyday, I thank him for this. I was given a sobriety test and when I passed, I think perhaps he might have thought my claim and defensive attitude towards my addiction and mental health were potentially validated. I do remember him apologizing for the accusation.

The first thing he did was charge me appropriately ensuring that I was held responsible for my actions. He showed me respect and dignity in this process. With the claims of what had happened in my life, I have often found most professionals fail to act or simply refuse to do so. However, regardless if he believed me or not, he still connected me with detectives that could help me. Most would have called it a day. After this incident I admitted myself to the hospital as my PTSD was no longer manageable and I knew the mental anguish was going to kill me. Of course, I still needed to be given my ticket for negligent driving. Officer MacGregor brought it to me at the hospital and was sensitive to the fact that I was unwell. But this was the moment that he became my hero; he had a tear on his cheek. He told me he saw the statement that I gave the detectives. He now knew what I had endured in B.C. That moment of humanity and connection in a place where the walls are baby pink is something that I will never forget. I still received the ticket ( I told you, he didn’t cut me any slack).

From that day, I spent 38 days in the MHU, 14 days in a shelter, eight weeks in a trauma-based treatment facility, and four months in a treatment facility. This was only possible because Macgregor got in contact with Victim Services. I have a feeling he may have been persistent with them to contact me due to my situation, only based on the fact that the person I spoke with told me I could let him know they had gotten a hold of me and he didn’t need to call anymore.

Officer Macgregor saw me one more time at the hospital to check up on me to see how I was doing. He would be the only visitor I had. When I returned from treatment, we got to see each other again because I still required to get fingerprinted. Still, I was treated with respect and dignity. I did plead guilty and I have a criminal record. MacGregor took the time to be part of my recovery. He was present when I celebrated clean time. He has also helped guide me when I became a victim of a crime. He supported me by being present when I spoke with the detective, knowing that my fear of police was a barrier. To be revictimized can have a devastating effect on survivor. However, the words of encouragement empowered me to reclaim my voice and keep going because he believed in me. He made this all possible.

Today, I am now able to help survivors find the success in recovery and justice in healing from wounds that leave a person in a state of spiritual decay. The day I was arrested was the day my life changed. The actions that Officer MacGregor took have a direct result on why I am alive today. I believe in a higher power and I know that was my God’s intervention. We often recognize police officers for the bravery and leadership or community presence. What we fail to realize is it’s the actions done in the key roles and responsibilities of the job description that have the most profound impact on the lives of the people they serve.

Officer MacGregor had no requirement to assist a person who had committed a crime that day. He initiated the help I so desperately needed. In this profession, burn out and desensitization as a result of exposure to difficult aspects of the job can often take away from those in the field. With the opioid epidemic, I would have been another statistic. I know the actions that Officer MacGregor took were not only because he is a good police officer, but I also believe he is a good person. His empathy and actions saved my life. I am the daughter, mother, friend and neighbor that I wouldn’t have had the chance to be if Officer MacGregor was not the police officer that arrested me that day. Therefore, I think Officer MacGregor from the South Porcupine OPP detachment should be recognized for his service.