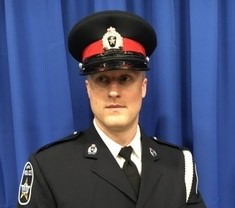 My son David always extends himself to the fullest. At the police academy, he put himself forward to achieve the highest marks in his class. He always thinks of others before himself. He is a very kind and generous person, and loves his job. He was initially hired as a Special Constable working in the Barrie jail. He then went on to the Police Academy to become a Police Officer. During the swearing in ceremony, he was chosen as the Class Victorian. I am very proud of my son; he puts himself in harms way to help others because that’s what he loves to do - help others.