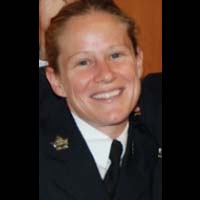 Despite Cst. Skelding being injured herself she was heard by neighbours in the townhouse complex comforting the female victim until paramedics were on scene to treat her injuries and transport her to hospital.  The female victim suffered serious injuries and had to undergo several surgeries; but survived.  Cst. Skelding was treated at the hospital and released.  Following some time at home recovering she returned to her duties at Waterloo Regional Police Service, South Division.
The Special Investigations Unit recognized Cst. Skelding for her decisive action that night stating that she did not simply shoot at the male when the threat presented itself.   The SIU stated “such a shot could have placed the woman at significant risk.”  Cst. Skelding’s colleagues, the female victim, and even the SIU recognize Cst. Skelding as having acted swiftly and decisively in the early morning hours on April 30th which likely saved the life of the female victim; and that of the male suspect.  Cst. Skelding had seconds to react to a situation and her actions saved the lives of all three people involved.  Cst. Skelding represents all that policing is to me and I look up to her.  As much as Cst. Skelding modestly believes she was merely doing her job that morning I believe she is a hero.