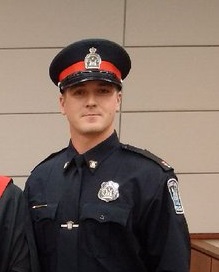 I am nominating Cst Chris Anderson as Hero of the year due to the fact that his quick thinking resulted in a woman's life being saved. On January 8th 2017 Cst Anderson came upon a female who was inside her vehicle at the intersection of Hope Street South, and Peter Street. Cst Anderson was able to determine through excellent observation skills that this female was in distress. Through Cst Anderson's investigation and strong deductive reasoning ability, he determined that this female was suffering from a life threatening anaphylactic shock. Cst Anderson began reassuring this female, and contacting EMS. As the female's condition worsened, Cst Anderson made a quick thinking decision. Knowing that other officers would not be able help the woman recover, and that the Northumberland Paramedics were a tremendous distance away, he thought outside the box and asked an officer to attend the center for addiction on Dorset Street for an EPI Pen.

The Epi Pen was located by an officer and administered by Cst Anderson. The female's condition began to improve. Northumberland Paramedics eventually took her to the hospital to be assessed. If it were not for Cst Anderson's exemplary performance during this incident I have no doubt that this situation would not have had a positive outcome, and the female would have died. Throughout this incident Anderson showed poise and maturity beyond his one year of policing experience.