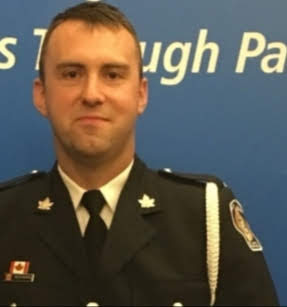 Const. Cole Richards is an active and diligent member of the Halton Regional Police Force, having been sworn in to the force on December 19, 2013. His continued dedication to his line of work, and his abilities to always overachieve his limits leads me to nominate him for the Police Services Hero of the Year Award. No matter the hours, time, or tasks that he faces during his daily work duties, he is always committed to making sure that he is present with an enthusiastic attitude to complete tasks at hand.

His candid help toward the general public has been voiced by many individuals, whom he has encountered during his duties, showing their genuine appreciation for the help he had provided for them.

In 2018, he had been awarded with a Life Saving Certificate by St. John Ambulance for his heroic efforts (along with other officers) in providing life saving first response action.

“On December 25, 2017 Constables Dupuis, Asmuth, and Richards responded to reports of a residential fire in which a resident had re-entered the home to save his dog and was trapped. The officers removed the 58-yr-old male through a window. The male suffered smoke inhalation and was treated by EMS.”

Cole- thanks for all you do, you touch the hearts of the citizens of Ontario.

The police are the public and the public are the police; the police being only members of the public who are paid to give full time attention to duties which are incumbent on every citizen in the interests of community welfare and existence.
- Robert Peel