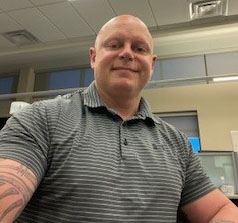 I would like to nominate Chris Doherty. Chris Doherty is an absolute HERO to my son Spencer. Spencer is a sweet and kind teenager who is on the autism spectrum and has a mild intellectual delay. When he was in Grade 9, he was sexually assaulted by an older student in an empty classroom at his high school. Spencer told us about what happened immediately after school that day. Chris Doherty was the Detective Constable at the Child Abuse Unit at the Niagara Regional Police Service that interviewed Spencer and was in charge of the case. Constable Doherty displayed amazing kindness, patience and caring as he interviewed Spencer and spoke with me as a distraught parent. He clearly explained the process of how the investigation would work and patiently answered all of our questions.

Over the next two weeks, Constable Doherty interviewed two other witnesses, which also included another learning disabled student who also was a victim of the same perpetrator. Constable Doherty even came into the school to interview one of the students who couldn't get a ride to the police station. These teenage boys were amazed that he came to the school to help them.

Due to Constable Doherty's hard work, there was an arrest made within two weeks and multiple charges of sexual assault were filed against the perpetrator. This meant so much to the parents of the these boys and the boys themselves because until the arrest, we were at the mercy of the perpetrator's parents to not send him to school and the boys did not feel safe. Due to Constable Doherty's efficient and hard work, the arrest was made and with that came a court order issued to keep the accused away from the victims and their school.

These boys felt heard, validated and safe all due to the work of Chris Doherty. Chris Doherty is a HERO to my son Spencer, the other victim and the students who had previously felt helpless to protect themselves from this sexual predator. He is also a HERO to me, my husband and the families of the other victims. I think he deserves recognition for doing an amazing job. His hard work and compassion made a huge difference in the lives of many of us and we will never forget all that he did for us!